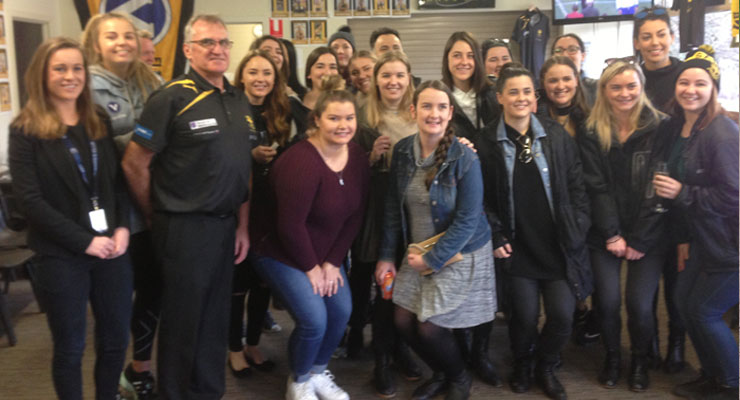 WOMEN’S FOOTBALL TEAM IS LAUNCHED
Our Women’s Football Team was launched at the Women’s Football lunch on Saturday August 6, 2016 at the club rooms at Ferndale Park. Club President David Malcolm announced the appointment of Damian Sutherland as the inaugural coach of the Women’s Team. Damian has coached for many years at junior level at the Ashburton Redbacks, and is a Premiership coach at senior level with St Mary’s Salesian. Our guest speaker was Alicia Eva, who has been an exhibition player for the Melbourne Football Club in its recent matches against the Western Bulldogs. She is the current captain of the Melbourne University Women’s Football Club and is a respected leader in the Victorian Women’s Football League. State Member for Hawthorn and shadow Attorney General, John Pesutto, spoke at the launch and offered his full support for the development of Women’s Football at St Mary’s Salesian. 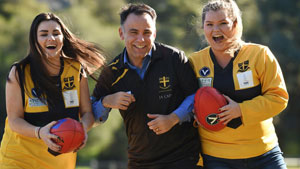 Vivienne Ellis and Maddie Campbell with Hawthorn MP John Pesutto.
Progress Leader July 12 2016
IT’S game on at the St Mary’s Salesian Football Club with a women’s team about to be launched. The club has received the backing of Hawthorn state Liberal MP John Pesutto who has described it as “leading the way in female participation in sport”. “As a father of three girls I am totally supportive of this initiative and look forward to ensuring women have the capacity to access all kinds of sport at all levels,” Mr Pesutto said.
CLICK HERE to read more

WOMEN’S FOOTBALL PRACTICE MATCH: History in the making!
The 1st St Mary’s Salesian Women’s Team Practice Match was played at Ferndale Park on Saturday August 20, 2016 against West Brunswick. The game came down to the wire, with scores being level in the dying minutes. An exciting foundation to build for season 2017! Sarah Yule snagged 3 goals (including the game sealer) and Michelle West finished with two and Eliza Stanley with one.
St Mary’s Salesian 6. 3 (39) def West Brunswick 4. 9 (33)