Alan Martello is the club’s most decorated player. He played over 100 games for the club from 1963-1969 and was recruited to Hawthorn in 1970 at age 17. During his eleven years at Hawthorn, he played in the 1971, 1976 and 1978 Premiership sides, and represented Victoria in 1973. Alan returned to St Mary’s Salesian in 2012 and held the position of Football Director and Director of Coaching up until the end of season 2018. He was also an architect, along with Norbert Graetzer, of the Palmary Development Program, which between 2012 and 2016 brought ten indigenous young adults from Northern Territory to Melbourne for a year to further their education at Swinburne University, and play their football at St Mary’s Salesian.

The Alan Martello Encouragement Award is awarded each year to a young player chosen by Alan to support their development into senior football. The winners have been:
2021: Jacob McElroy
2019: Hamish Heath
2018: Ned Baxter
2017: Tom McGennis-Destro
2016: James Ellis
2015: James Curwood
2014: Will Douglas
2013: Charlie Angley

ALAN MARTELLO FEATURE IN THE AFL RECORD
“Former Hawthorn and Richmond star Alan Martello is a great example of a high-profile player putting everything he can back into local football. His reasons are simple ….. he just loves the game and his old club.” Adam McNicol, AFL Record, September 6-8, 2013 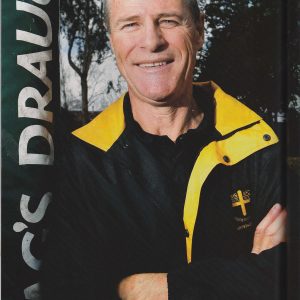 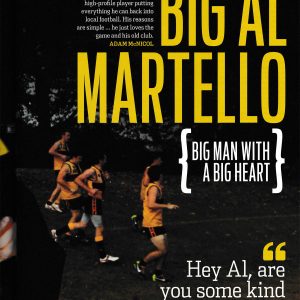 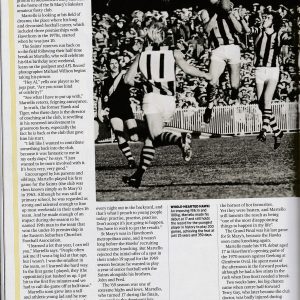 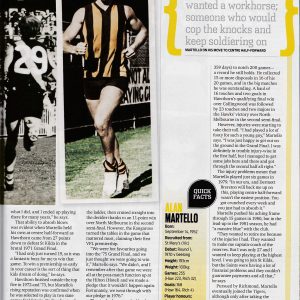 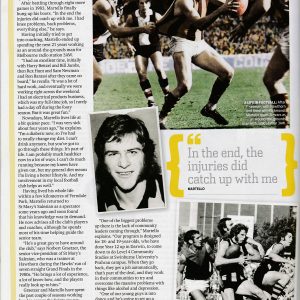 Alan began his career at St Mary’s in 1963, playing in the U/16’s at age 10, while still attending South Camberwell Primary school. 1963 was the first year of junior football at the club and the team won their way through to the Grand Final under captain Max Thomas, but went down to a very good Burwood United side.

In 1964 Alan was 19th man in the U/16 Premiership side as an eleven year old. The side was coached by John Mason, and Alan played alongside Rob Skinner, David Chessell and elder brother John Martello. The Grand Final was played in muddy conditions at the Box Hill Oval against Highfield Rd Methodists.

In 1966 he played in the U/16s alongside Colin Tippett (c) and Phil Tyler, and coached by Dick Hooker.

The following year, 1967 he won the Eastern Suburban Churches Football Association (ESCFA) U/16 Best and Fairest as a 14 year old, playing in the U/16 team captained by David Jones and coached by Dick Hooker. Colin Bellinger and older brother Fred Martello were also members of the 1967 U/16 team.

In 1968, he won the ESCFA U/17 Best and Fairest, playing in the U/17 team captained by David Jones and coached by Dick Hooker. Tony Goldsworthy, Colin Bellinger and older brother Fred Martello were also members of the 1968 U/17 team.

Despite offers from Hawthorn to play in their U/19s, Alan stayed at the club in 1969 and joined older brothers John Martello and Fred Martello in A Grade, captain-coached by Doug Philipson. This was to be the only season that the three Martello brothers played together as teammates in the one team. That year, Alan won both the Club and the ESCFA A Grade Best and Fairest as a 16 year old, and was the dominant player in the competition. He was one of three St Mary’s players selected in the ESCFA Representative team that defeated the South West Gippsland Football League Rep team. Alan was joined in the Rep team by Ron Wilson and Geoff Trenerry. Alan turned 17 during the 1969 finals series, and was presented with the 1969 ESCFA A Grade Best and Fairest Medal on Grand Final Day by Association Secretary Bert Cooper. Players from the Burwood, Highfield, Pioneers and Dandenong clubs joined Alan for the presentation and lap of honour around the Camberwell Football Ground. The Saints dominated the 1969 season, and went into the 1969 Grand Final as ‘hot’ favourites, only to be beaten by the more experienced Box Hill Pioneers in a Grand Final ‘upset’ in what was Alan’s last game for St Mary’s.

Alan was recruited by Hawthorn the following year, and played his first game of League football in Round One 1970, as a 17 year old, against Geelong at Glenferrie Oval.

“From St Mary’s Church of England Camberwell, he was a big strong and forceful centre half forward and ruckman, who played many fine games for the Hawks over a decade. Martello could kick prodigious distances and had the ability to burst through packs and create the play.” – Encyclopedia of AFL Footballers by Russell Holmesby and Jim Main.