FIRST SHARED THURSDAY NIGHT DINNER
Thursday April 2, 2017
Thursday night before the first game of the season and our first shared Thursday night dinner with both our men’s and women’s players attending. We announced our inaugural Women’s Leadership Group – Grace Barry, Kat Aabryn, Viv Ellis, Mads Stanley, Jas Cannizzo and Isobel Leggett – and our inaugural Club Captains were announced – Grace Barry (Women’s 1) and Brittany Clark (Women’s 2). Jas Cannizzo was announced as one of three recipients of the 2017 Ian Elliott Award. This Club Award, named in honour of the late Ian Elliott has been awarded annually since 2008 and recognises young players who not only demonstrate talent, but also exhibit a true Club and team attitude. The other two recipients for 2017 were Manny Dolan and Micheal Howard.

The announcement of the Rd 1 Women’s (1) and Women’s (2) teams saw 45 players selected to represent the club for the first time. We were ready for the season to commence!

CHANGING THE CULTURE OF OUR GAME
Michael Sholly, VAFA CEO, The Amateur Footballer April 22, 2017
“Round 1 2017 will go down as one of the most significant in the history of the VAFA. This was the day when women became fully included in the association, with 40 new teams joining the 230 male equivalents to become the biggest , and might I dare say, best community football competition in Australia. Women are no longer content to sit on the sidelines and are exercising their right to participate in the VAFA as players.”

Oh When The Saints Go Marching In! Singing the song for the first time to celebrate our first win in women’s football!

……. and celebrated in the rooms! 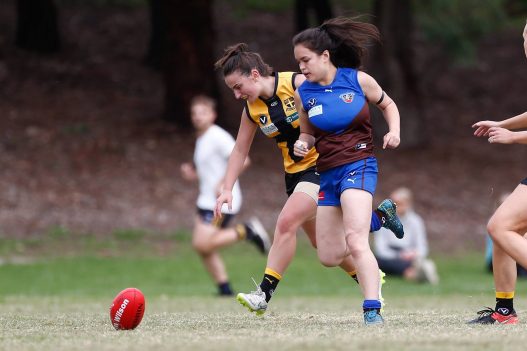 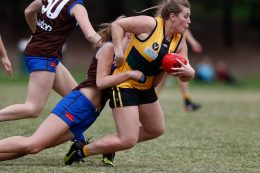 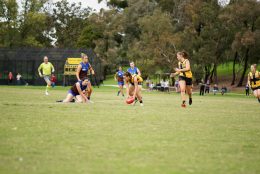 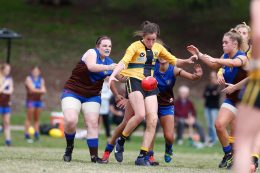 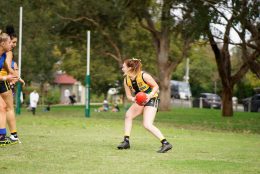 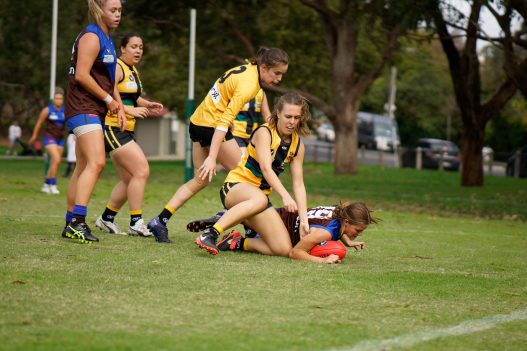 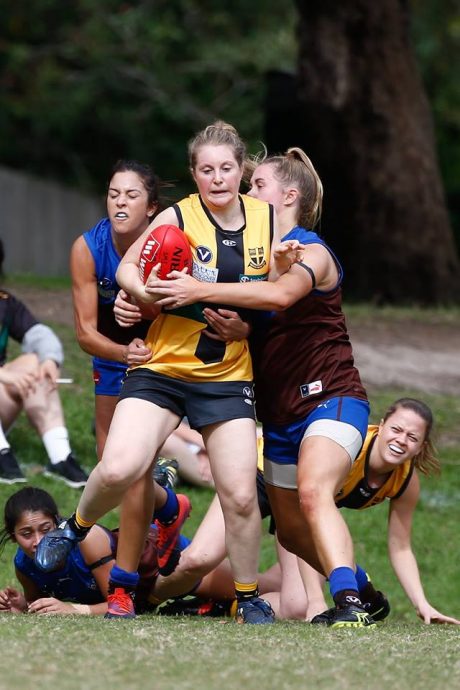 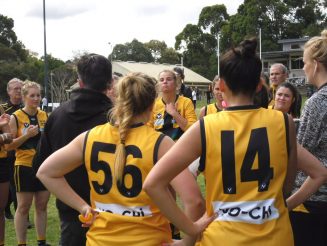 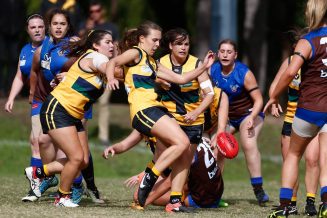 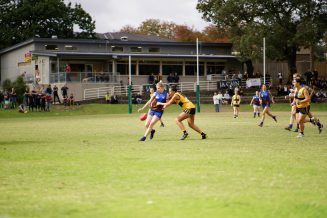 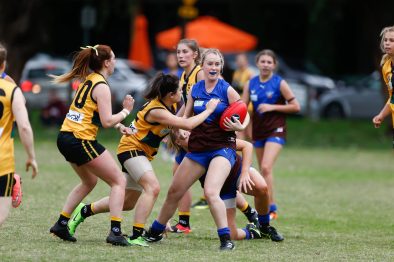 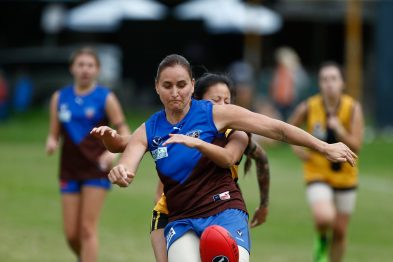 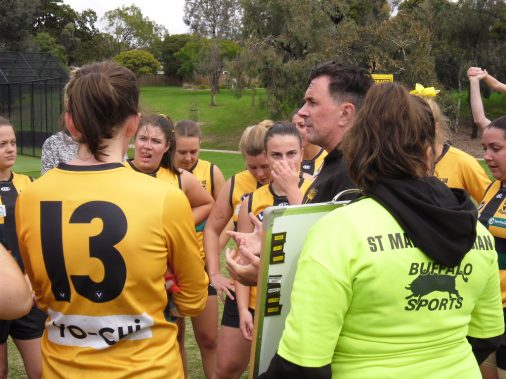 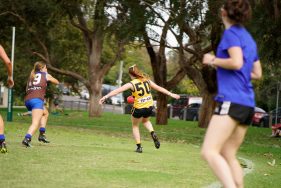 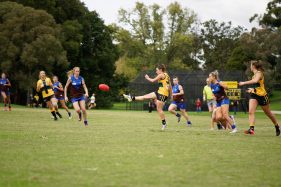 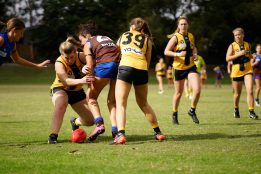 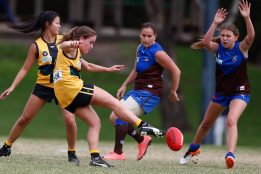 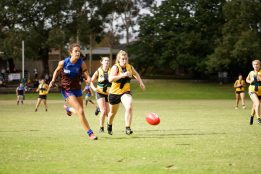 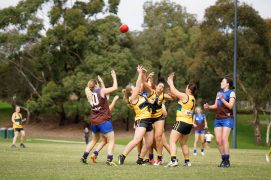 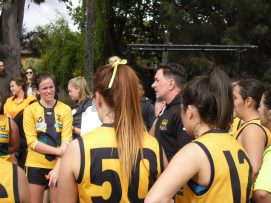 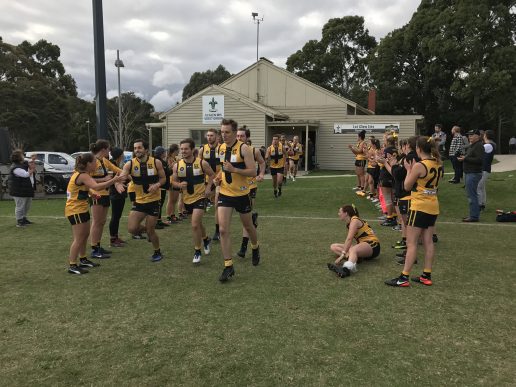 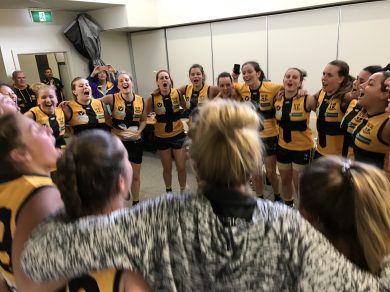 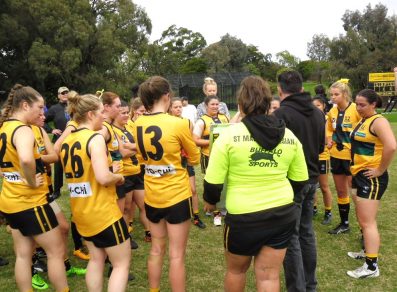 What an introduction this was for our 22 players, most of whom were playing their first official game of football.

In our 1st official game of women’s football, our Women’s (1) was drawn to play a Saturday night twilight game against Beaumaris at Banksia Reserve, immediately following the Men’s Premier A match between Beaumaris and Old Melburnians. While a 5pm away game was not the ideal time-slot for a season opener, no-one could have predicted the drama that was to follow.

We arrived at half time time in the men’s game with heavy rain falling from a black sky and with lightning threatening. Our players, coaches, trainers and team managers all squeezed into one corner of a busy Beaumaris social room to wait until Old Melburnians cleared the visitors room for our use. While they waited, players started their warm-up and taping as best they could. A little daunting, and a little unusual – but we pushed on!

Once the half time break was done, we moved all our gear into the visitors change room and began our match preparation. However, it wasn’t long before the Old Melburnians players started streaming back into ‘our’ change room – their game had been halted due to lightning strikes! All we could do was gather up our gear as quickly as we could and head back to our corner in what had now become a very busy social room.

After some improvement in the weather, it was decided that the men’s game could continue so we packed up again and moved from the social room back to ‘our’ change-rooms. We should have known it really, but it wasn’t long before Old Melburnians were back – this time for good. Play was officially abandoned in the men’s game due to lightning strikes with 16 minutes remaining in the final quarter. It was back to the social room for us!

The big question now was whether our women’s game would proceed or not, and certainly none of us knew. The scheduled 5pm start time had well and truly passed and the umpires put a 5.45pm deadline on making a call on the game. Meanwhile the Beaumaris after-match was kicking-in around us in the social room. The rain had eased and the lightning abated and with the umpires furiously checking the weather maps, they decided that it was safe to start our game. Our 22 players were good to go, so it was out of the social room, straight onto the ground, a quick warm-up, an historic team photo and then into the game!

It was wet, it was cold and it was dark and much of the game took place at the social room end of the ground in front of a vocal Beaumaris crowd with their after-match very much in full swing. Four unanswered third quarter goals pretty much settled the game in favour of the home side. The match mercifully was called off around 7.30pm, with 5 minutes remaining on the clock when the solitary umpire collapsed in pain with a massive cramp attack and was unable to finish the game.

In so many ways, the final scoreboard was irrelevent to the real message that we took back to Ferndale Park from this opening game. The resilience displayed by our 22 players in what was a pretty extraordinary set of circumstances was to be come a trademark of the team as we progressed through season 2017 and made our mark in women’s football.
***************************** 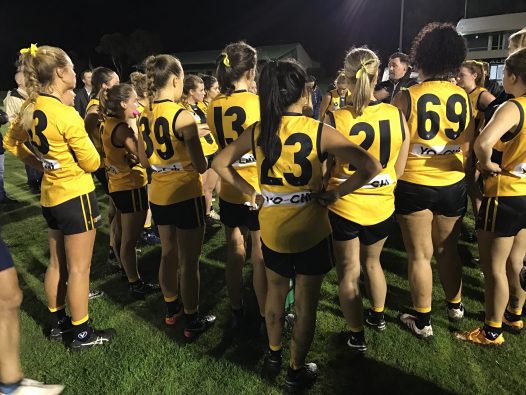 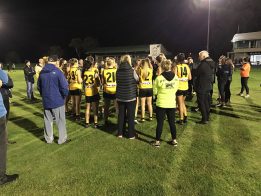 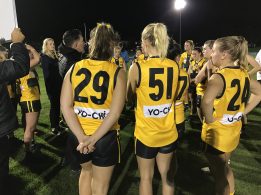 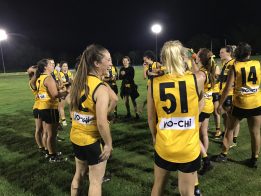 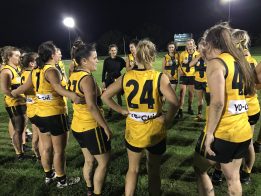 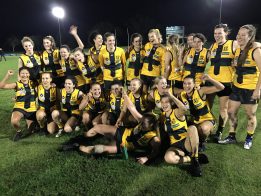