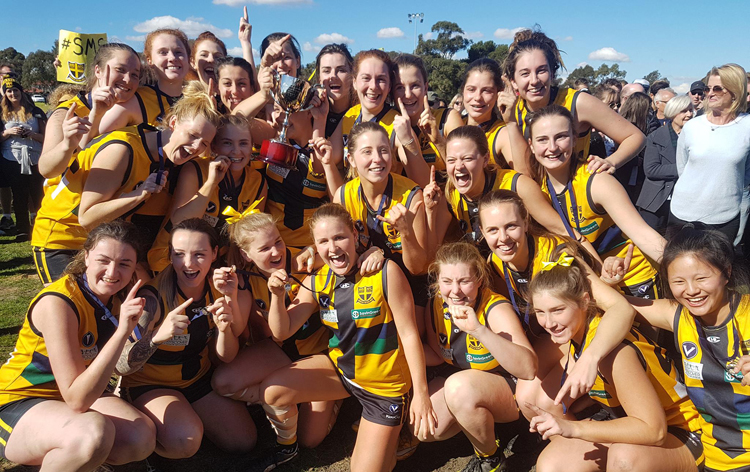 St Mary’s Salesian is a strong, family oriented community football club based at Ferndale Park in Glen Iris. The club plays in the Victorian Amateur Football Association (VAFA) where all players play for the love of the game. Our men’s teams have played continuously at Ferndale Park since 1932, and in 2017 we became a foundation club in the inaugural VAFA Women’s League.

We have had three wonderful years of Women’s Football, with the establishment of three teams, promotion to VAFA Premier A in 2019,  Senior Women’s Premierships in 2017 and 2018, and a Preliminary Final appearance for our Reserves in 2018 and 2019.

PLAY AT THE HIGHEST LEVEL
In 2020, our Seniors and Reserves will compete in  Premier A which is the highest level of women’s football in the VAFA. We will be one of only eight clubs to compete in Premier A in 2020, joining Caulfield Grammarians, Marcellin, Kew, St Kevin’s, Old Trinity, Old Xavs and West Brunswick.

“To be one of only eight clubs in the VAFA competing in Premier A is a huge credit to everyone involved at our club”, our senior coach Simon Brownhill said. “It is a tribute to how far our women’s players have come in such a short time. Premier is only one grade below VFLW, it’s a huge achievement and a great level to be playing at.”

Our seniors and reserves are backed up with a thirds team which means all our players are able to play at a level that best suits them.

ONE CLUB ENVIRONMENT
The club also fields three open-age men’s team, with our senior men playing in D1 in 2020, and our men’s thirds coming off a Premiership in 2019. Ours is a club with equal numbers of men’s and women’s players and we operate in a one-club environment where all players from all teams participate equally in the life of the club.

St Mary’s Salesian has a strong and stable voluntary committee, and is financially stable. We are a very respected club in the VAFA both on and off the field.

FOOTBALL AT ST MARY’S SALESIAN
Our club is a very good fit for players of all ages looking to play Women’s football in 2020 (and beyond). Our players range from those who have played before to those who are new to the game.

We have ann extensive and experienced coaching panel, headed up by senior coach Simon Brownhill. Our team of dedicated coaches enables us to encourage each player to develop and to strive to be the best they can, no matter their skill level.

WE ARE A DESTINATION CLUB FOR:
– women who are new to football and transitioning from other sports
– the growing number of girls who are playing football at the junior level
– women looking for a pathway in VFLW and AFLW

New to the game
We are well placed to provide players from other sports the opportunity to transition to football and develop their AFL skills to a high level. Looking back at season 2017 we had a small number of players who had played AFL before, but the majority were new to AFL and had a background in other sports – netball, soccer, hockey being the main ones. We were able to develop the AFL skills of our players to a level where we won a Premiership in Division 1 in our first season with a team mainly composed of players from other sports who were new to AFL backed up by a core group who had played before. A similar story in 2018 when we experienced a further influx of new players with a background in other sports. Our senior women’s team won their second premiership and our reserves played in a preliminary final. Our 2018 Premiership side and our Reserves Preliminary Final sides both contained many first year players.

In 2019, one of our players, Shakira Schifferle, won the VAFA Rising Star Nomination in Premier A in only her 5th game of football after playing State Level Netball for many years.

Pathway out of junior football
A growing number of girls are playing football at the junior level, and we are well placed to provide them with a pathway into senior football. We are a three team club that plays at the highest level in Premier A. We have a track-record of on-field success with premierships and regular finals appearances. We can also provide a pathway into higher levels of football.

Pathway to higher level football
We are an excellent destination club for players who are looking for a pathway into higher level Women’s Football in the VFLW or AFLW.

The opportunity of playing in the VAFA Rep side is another pathway opportunity into higher level football.  In 2019, our leading goalkicker Steph Lawrence won the Spirit of the VAFA Award playing for the VAFA Big V Rep side and was invited to try out for the Casey Demons in the VFLW. Two of our players, Lisa Davie and Tash Rappos both played in the first-ever VAFA Women’s Big V Representative side in 2017.

SOCIAL AT ST MARY’S SALESIAN
You will be joining a very welcoming and inclusive club which will provide you with the social environment for you to make new and lifelong friends. Ours is a young playing list, and our players come from a diverse range of junior backgrounds. We have roughly equal numbers of women’s and men’s players, and they are around the same age group which enables us to successfully operate in a one-club environment where all players from all teams participate equally in the life of the club. All our club functions are attended equally by players from all teams, and are attended by both our male and female players and supporters.

You’ll have a lot to look forward to at St Mary’s Salesian with a packed social calendar including: Cruises, Annual Balls & House party styled events.

PLAYERS
CLICK HERE to register your interest in joining us as a player.

PLAYERS, LOCAL SCHOOLS AND JUNIOR CLUBS
As a club, we are very interested in developing on-going relationships with schools and junior clubs in our area, and to offer girls a pathway into a club where they can play football once they have left school. Please email us with any questions or for more information: email secretary@stmaryssalesianafc.com.au

REGISTRATION OF INTEREST
We are recruiting for season 2020 – all new players are welcome! We invite you to Register Your Interest in playing Women’s Football at St Mary’s Salesian Amateur Football Club in season 2020.


How did you hear about us?

I am registering my interest in playing for: